Honey Bees - What’s All The Buzz About?

Bees are found all around the globe, with more than 20,000 species known of to date. Honey bees represent a small percentage of these species, but as pollinators they are incredibly important to the survival of mankind. One quarter of the food humans consume comes from crops pollinated by honey bees. It might be surprising, but beekeeping is one of the oldest agricultural efforts known to humans. Today, beekeeping is both a hobby and a business. 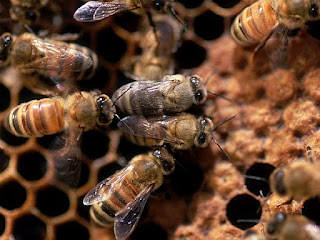 Honey bees can be recognized by their golden, light brown colour and oval shaped bodies with dark-to-light ridges along their abdomen. They are typically about 15mm long and are covered with a golden fur. These herbivores are typically non aggressive, but they do have a stinger, which they will use if they feel threatened. For this reason, it is best to have a professional come and remove any honey bee nests that might be located near your home or business. 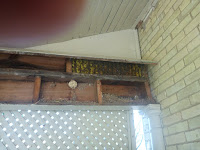 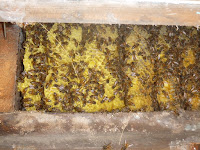 Honey bees are unique from other bee species because they are extremely social creatures and live co-operatively among other members in the hive. In the wild, hives can typically be found in hollow trees; although, in rocky areas, caves and crevices in rocks can also be a good spot for bee hives.  Honey bee hives can also be found in homes, most commonly in wall voids. A honey bee hive is made entirely out of a wax that the worker bee secretes from a highly specialized gland in its abdomen. The  worker bee takes a couple pieces of wax from their abdomen, mixes it with saliva until it’s soft enough to form into the comb cells that make up the hive. In Canada and the rest of North-America, man-made bee hives are called apiaries and are constructed out of wooden box frames stacked on top of one another to make the hive.

Honey bees are social creatures that live in colonies; a single colony consists of:

Swarming is a natural part of a healthy bee colony and will happen when a hive has limited space. This happens when the honey production is so great that the bees being fill cells that were intended for eggs. With limited space for egg laying, the queen with leave and split the colony. In this case, a queen bee will leave, bringing with her half of the worker bees and leaving behind a new virgin queen to ensure the survival of the hive. A honey bee swarm may consist of thousands of worker bees that temporary form a cluster on tree branches or shrubs, and will remain there for up to a few days; during this time a scout honey bee searches for a new location for the colony. Once a site is located, the swarm immediately flies to the new site.

Honey bees and flowering plants live in symbiosis, depending on one-another to carry out their jobs on planet earth. Our planet would be drastically different without honey bees here to cross-pollinate flowering plants and fruit blossoms, which is why these creatures are of such high importance to humans. They are responsible for pollinating a vast amount of crops that produce seeds and food for our survival. This is why it is important to understand the significance of pollination by honey bees and to protect them through education and research.

Honey bees serve an important purpose, but they can also pose a problem and sting you if they feel threatened. This is why it’s important to have a professional remove a honey bee nest that may be located in or around your home or business.  Honey bee nests can often be found inside of wall voids and the roof of a home. It is vital that you do not try to kill a honey bee’s nest. These creatures are decreasing in numbers and need to be protected, not killed.

Sawyer Pest Control is available to remove bee swarms and or nests located within structures. Once captured or removed, bees are placed into a hive and relocated from the site to a foster location or one of our yards. This is a time consuming and labor intensive process that requires skill, proper equipment and the specialized clothing. Sawyer Pest Control uses environmentally friendly methods to deal with honey bees, ensuring the least amount of damage to the area requiring removal, if any. A professional will safely remove the bees and relocate them to an awaiting hive or apiary, where the bees can continue with their job of pollination and humans can benefit from their honey production. This is a unique control process which supports the survival of the honey bee allowing for continued pollination services.

Below are some photos of a honeybee removal from a home.