When it gets chilly outside, we're not the only ones who want to come inside for winter. Both urban and rural homeowners battle critter infestations in autumn - actually, all year round, depending on the animal. But in fall, mice, squirrels and raccoons, in particular, will do their best to pop in for a visit, and stay for the season.
According to Bill Dowd of Humane Wildlife Control, which operates in Quebec and Ontario, we're practically sending them gold-plated invitations. 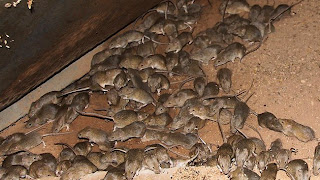 "We've made it very easy for these animals to flourish in our cities by giving them food sources - our garbage," he says. "A raccoon's idea of hunting these days is not looking to a creek for crayfish, it's climbing out a chimney and tipping over the garbage can."
In more than 20 years in the business, Dowd has seen some nasty stuff.
"The biggest damage is probably electrical fires, $60,000 to $70,000 in property damage due to fires caused by squirrels or mice chewing on electrical wiring," he says.
And an infestation won't just hurt your wallet. There are health risks associated with these furry critters.
"Animals in an attic are defecating and urinating," says Dowd. "We'll go into some attics that are unbelievable. No insulation, mounds of feces. The entire attic is contaminated."
The best medicine, and least costly in the long run, is prevention. There are jobs a homeowner can do, Dowd says, while others require a professional.
If you already have an infestation, getting rid of the critters and whatever they've left behind (disease-laden waste, contaminated insulation, parasite-infested corpses) is a job for the pros, who will determine where the animal is gaining entry, put one-way doors on active entry points, decontaminate, and then seal all the entry points once the animals are out.
If you're confident no one's moved in yet, inspect your home exterior regularly for entry points and seal them..
"The biggest challenge is the proper maintenance of your roof," he says, suggesting it be inspected once a year (before the snow). Look for loose shingles, broken or missing roof vents, animal feces and/or tracks, signs of chewing, and check the eaves troughs, where a build-up leaves not only creates an attractive food source for raccoons, squirrels and birds, but can also create other headaches. If the debris freezes, the ice can cause the fascia to pull away from your roof. "That creates a gap, so you've created an entry hole," says Dowd.
Also check for gaps at the bottom of your garage door and avoid leaving the door open unattended; inspect soffits and downspouts to ensure they are still attached properly, and ensure there's no gap between soffits and the house; check weep vents around the base of your home, which should be screened with 1/4-inch screening (don't block them or you'll create moisture problems inside); check for holes in pointing; damaged stove, plumbing, roof or wall vents; damaged or uncapped chimney; roof valleys (where two rooflines meet). Caulk small holes, but larger holes should be screened.
If something's already inside, let the pros handle it, and hire someone who understands animal behaviour.
Dowd warns against covering a hole immediately, for instance, because an animal will instinctively return and make another one nearby.
"It's important to put screening up there initially because they see through the screen, see their den and start tugging, chewing and ripping at our screen to get back in. Eventually they realize they can't get in and they move on, because they'll typically have 10 to 15 den sites in a neighbourhood."
He also tells homeowners to hire someone who won't harm the animal and will ensure family units are kept together. And trapping doesn't work.
"Seventy percent of relocated animals die," says Dowd. "Plus you still have the odour, which will attract other animals and you still have the hole in your roof."
The only long-term solution is prevention by sealing vulnerable areas and being smart - doing simple things like putting your garbage out in the morning, never overnight, rinsing recyclables and putting lids back on.
"Decreased food sources will keep populations down," says Dowd, which proves sometimes, the simplest solutions are the best . . . and cheapest. READ MORE
Posted by Unknown at 10:52